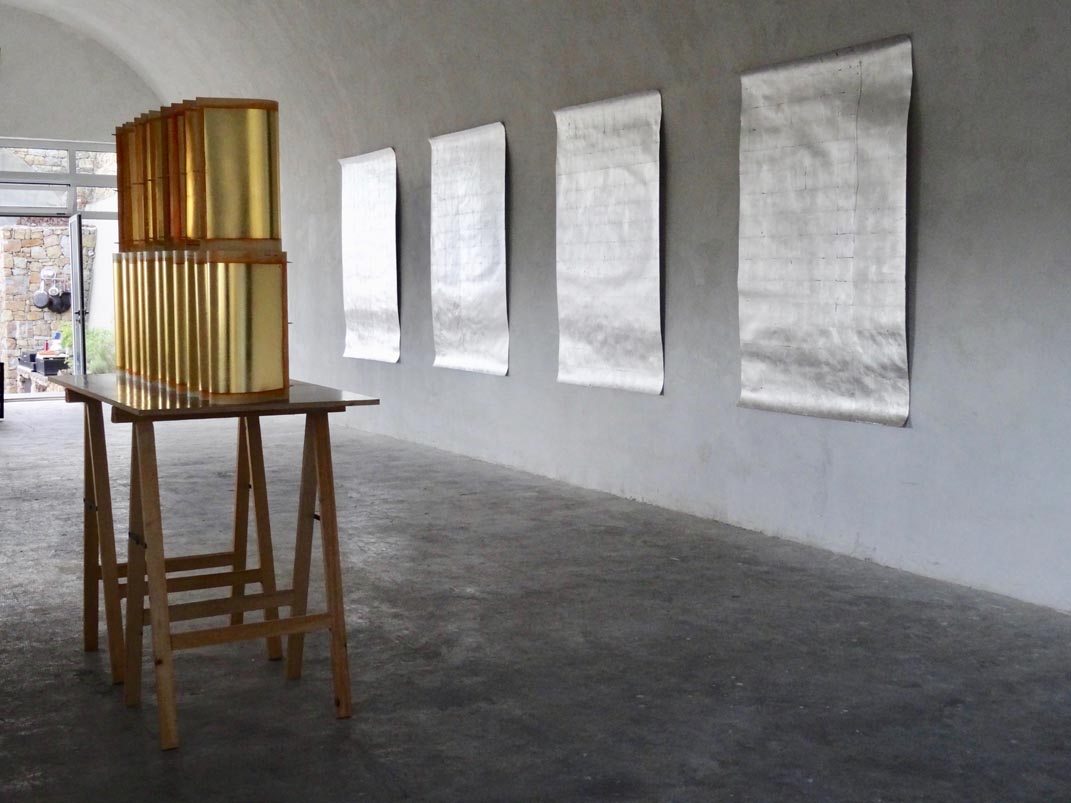 Ryuha is a school of art in which stylised and structured skills, techniques, traditions are inherited collectively. Normally this happens by bloodlines of the patriarch or through the students of the school – just as it does for Ikebana, tea ceremony, martial arts, among others. In Japanese painting, Tosa-ha, Kano-ha or Rin-pa are generally the most well-known of these Ryuha schools and styles. The style known as Rin-pa today in particular was initiated in 17th century Kyoto by Koetsu Honami (1558−1637) and Sotatsu Tawaraya (year of birth and death unknown). It was then significantly developed in the 18th Century by Korin Ogata (1658−1716) and his younger brother Kenzan Ogata (1663−1743). The style was inherited and introduced to Edo by Hoitsu Sakai (1761−1828) among others thereafter.
The main characteristics seen in the Rin-pa style are: employing gold/silver leaves for flat background foundation of painting; repeating the same ornamental patterns; establishment of a painting technique called ‘Tarashikomi’ (*1); asymmetric composition rather than symmetric; and tabulating all these elements onto one single flat surface – for example, a gold/silver leaved background, graphically painted tree, and ornamental patterns. What makes Rin-pa so outstanding amongst other schools is that firstly, a number of collaborations were attempted across different disciplines (for instance, Koetsu Honami made calligraphic work onto Sotatsu Tawaraya’s painting, Korin Ogata painted onto his brother Kenzan’s potteries, and so on). Secondly, it has been inherited and developed over time not by bloodlines or pupils, but by indirect relationships of followers with their own free-will and admiration. Such aspects also seem to reflect the Japanese people’s instinctive personality and talent, as well as the rather organic development of Japanese art itself. These were once explained as ‘awaiting new things coming from beyond the ocean [from China since ancient times, and from the Western world since the Meiji Restoration], accepting them, altering them as they please based on their own environment and views, sometimes turning them into parody – this sense of curiosity and applied skills.’ (*2)
Atsuo Hukuda (b.1958) is a sculptor who has been employing traditional Japanese painting techniques and materials such as gold leaf, silver leaf and/or Japanese Urushi lacquer. The minimal body of work, visualised strictly according to Hukuda’s concept ‘Dry / Light / Clear / Sharp’, consciously appeared along the lines of Rin-pa. Shuhei Fukuda (b.1997) on the other hand is an art student and a son of Hukuda. He is currently studying traditional Japanese painting, and exploring his own approach to the world by using traditional techniques and materials such as silver leaf. The relationship between the two artists – they coincidentally picked the same materials to work with, and are father and son – is certainly one of the forms of inheritance of tradition or skill. Hukuda, in addition, is also known as an active curator for over 35 years, notably through his achievements at CONCEPT SPACE. SUKI-MONO-TACHI: Ways Since Rin-pa is one of the exhibition series that he has been curating since 1991 under the aim of discovering today’s interpretations towards Rin-pa style within contemporary art.

(*1) It directly means ’dripping in’. A Japanese painting technique in which a second layer of paint is applied before the first layer becomes dry. Reportedly Sotatsu Tawaraya was the first person to consciously employ the technique.
(*2) Nobuo Tsuji, How to Overview Japanese Art: Iwanami: The Stream of Japanese Art #7, Iwanami Shoten, 2001, p.108.